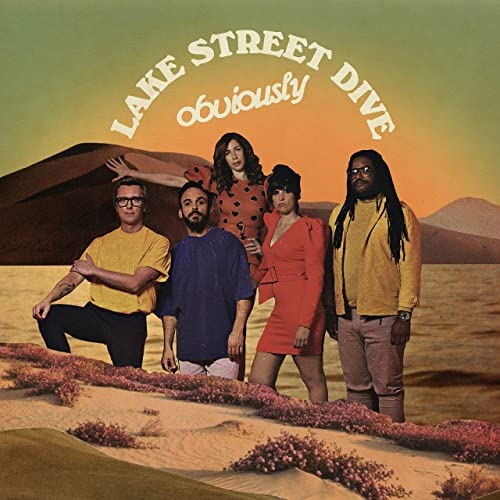 
Lake Street Dive, a Brooklyn-based five-piece act, have just released their eighth album. ‘Obviously’ marks a new collaboration with hip-hop producer Mike Elizondo, making this album a clear contrast to their earlier releases. Originally formed in 2004, when four of them attended the New England Conservatory of Music in Boston and long regarded as idiosyncratic pop outliers, this is a band fronted by a lead singer with her roots in jazz, Rachael Price, and their new album carries a wide range of styles. On ‘Obviously’ Price said: “You’re trying to express your anxieties, your feelings, your sadness, your happiness, all of these things – your authentic state of being in a song. But you’re also trying to create something people will listen to over and over again. That’s the unique fun thing about music, putting these messages into three-and-a-half minute snippets, dropping whatever truth we can, and hoping it’s the type of thing that people want to ruminate on.” Thematically, this new eleven-track collection is eclectic, covering a range of themes – from romantic love and attraction in ‘Hypotheticals’’ and the inequality facing women in ‘Being a Woman’...... “Being a woman is an uphill climb/Eighty cents on the dollar and you need every dime/…if I complain they'll blame my feelings/But look at the view from my glass ceiling”; to the generational impact of climate change in ‘Making Do’: “What do I say to my baby girl/Leaving her with a half a world/That we could’ve done a lot?” Highlights of this sonically colourful, genre-defying album include: the opening track and single ‘Hypotheticals’ with its feel-good R&B grooves, underscored by Price’s mellifluous vocals; the bluesy, soulful ‘Same Old News’, a duet between Price and new member, singer, songwriter and keyboardist Akie Bermiss; eco-anthem ‘Making Do’, the video featuring a cameo appearance by Massachusetts Senator Ed Markey, co-sponsor of the Green New Deal; the quirky, funky, trumpet-led ‘Know That I Know’ with its jocular lyrics: “You’re Captain Kirk to my Spock/You know, I’m Dee Dee Ramone and you’re punk rock;” the jazzy, reflective ‘Anymore’, a subtle trumpet and piano accompaniment complementing Price’s reflective lyrics about a love gone sour: “Cause it’s just another battle/Seems like you’re still having fun/So I’d say that you have won/But I’m not keeping score/Anymore, anymore;”; and the closer, the multi-layered acapella ‘Sarah’, centred around Price’s vocals. Unpredictable and innovative, it will be intriguing to see what direction this multi-talented band go next. ZENA GRIEG March 2021 Approx 300 words